skip to main | skip to sidebar

Link to the person who tagged you.
Post the rules on your blog.
Write six random things about yourself.
Tag six people at the end of your post and link to them.
Let each person know they’ve been tagged and leave a comment on their blog.
Let the tagger know when your entry is up.

Here are six random things about me, in the order in which they occurred to me:

1. I have done enough of these "random things about me" memes now that I think I'm starting to repeat myself. For example, the first thing I thought of (because I currently need a shower) is how I am infamous for taking really long showers. But I know I've told the internet that particular fact before, and frankly I feel I'm too young to be boring you all with repeated accounts of the same story like somebody's grandpa talking about the war. However, because of my undying affection for Amy, who tagged me, I shall endeavour to think of five more never-seen-before random things.

2. Oh, here's one. I have always had a freakishly large head. One-size-fits-all hats don't. When I was ordering my cap and gown for college graduation, the lady doing the head-measuring told me that the caps were running large and most girls were taking small or extra-small. Then she measured me and said, in that it's-nothing-to-be-embarrassed-about tone that people use at the doctor's office, "well, now, you would take a large or an extra-large." So imagine my confusion when trying on snowboard helmets a couple of weeks ago and discovering that I should order a women's small. It arrived today. It fits. In fact, it's a little loose side-to-side (thanks to the long-and-narrow cranium I inherited from my dad), leaving me with the terrifying, inescapable conclusion that my head is shrinking.

3. Staying in the cranial region, my hair is much thicker and has more texture at the nape than at the crown. I am actually pretty self-conscious about it because my hair is not really thin, but because it's fairly light and fine, light shines through at the hairline in a way that I think makes it look thin. And yet, whenever I get my hair cut, the stylist runs his or her hand through the back and gasps, "oh, it's so thick!" WTF, genetics?

4. I am awesome at driving in reverse. This is because my dad, who used to race cars and dirt bikes (like, a light motorcycle, not BMX) and is a great driver, taught me to drive backwards first. I went around and around the block, which is a horseshoe loop with three blind hills, in reverse about seventy trillion times before he finally let me drive forwards. I have occasionally been tempted to use this power for evil rather than good. I am an undefeated backwards racer.

5. I am nearly incapable of not raising my right eyebrow in pictures. It is an effort of will not to. Every official photograph I have of me features a popped right brow. My mother, grandmother, and great-grandmother all do the same thing. Neither of my sisters does.

6. My right leg is a little longer than my left leg, just like Rivers Cuomo. Because of this, I have scoliosis, and my legs are visibly different, muscle-wise, because my short leg works harder than my long leg. Unlike Rivers Cuomo, I would never get my short leg surgically lengthened, even if I got a brilliant album out of it. I cultivate my weirdness.

Okay, I think those are all relatively novel. I tag Jody, Madalyn, Beverly, and Michelle.
Posted by Cari at 4:38 PM 2 comments: 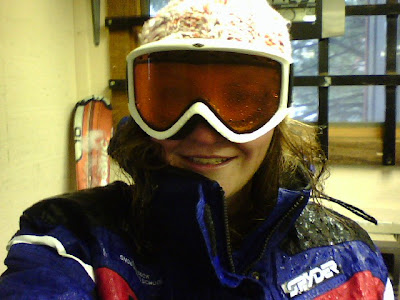 Labels: snowboarding, this is awesome

Awesome: I got picked by my boss at the mountain to go to a women's snowboarding clinic in Vermont. The mountain is paying for the hotel room and everything.

Stupid: My infuriatingly vague and pompous professor had scheduled two dates for our portfolio presentations for this hellish program I'm so glad I'm almost done with. He then decided we didn't need both and of course cancelled the one that doesn't coincide with the clinic.

Awesome: I never would've thought to ask him if I could present on a different date if I hadn't been encouraged to by my mom and another professor, but I did (after all, there's a football player in my program, and he got to miss class for practice all the time!), and he said yes!

Stupid: Instead of just letting me present my portfolio on the other date he had originally scheduled, my professor picked a date two weeks in advance of those two original dates. So instead of a month to finish all the papers and assignments for the entire semester and prepare my portfolio, I had two weeks.

Awesome: I am almost done with everything...

Stupid: ...except that he keeps giving me back assignments with the recommendation that I revise them. Which I wouldn't need to do if the assignment had been sufficiently explained in the first place. AND I am working on an assignment right now that he describes in the syllabus thusly: "grading plan." Yep, that's all. I don't know what the hell that means. I've googled it and I was working on something similar to what I found, but then I got a reply to my desperate-cry-for-help email to my fellow studets, and discovered that instead of a plan directed to him, the professor, I am supposed to write a plan directed to the students and parents. The semester in a microcosm: Well, if that's what you wanted, you should have said so!

And here's the capper.

Awesome: My best friend, who lives in Dallas (and whom I've seen three times since we graduated from college in 2001), is going to be in the area right after Thanksgiving.

Stupid: On the same damn day as the snowboarding clinic that I rearranged heaven and earth to attend.

Awesome: The same boss that gave me this clinic opportunity also picked me for a pro form (a card with a PIN and a password that entitles you to massive discounts from the snowboard company that issued it).

Stupid: Even though I need a new board--mine's six years old--I can't afford anything because I couldn't work this semester because I was doing this ridiculous, overrated, completely disorganized and unstructured program. (Bitter much?)
Posted by Cari at 10:12 AM 6 comments: 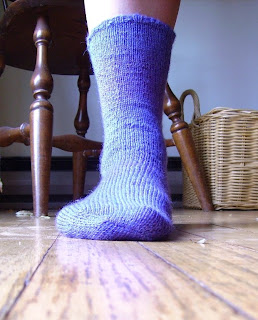 It's gonna be years before I get into that theoretical knitting stuff.

I finished a sock! Woo! Now before I cast on for the other one, I'm doing a sleeve of my Plain Jane Raglan (which, just to refresh your memory, was supposed to be my Ravelympics project, back before I become obsessed with mittens). Check out my sock and my incredibly flat feet: 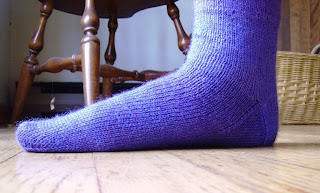 ...and I'm giddy as a schoolgirl! Snow before Halloween! This bodes well for the coming winter-- at least I hope! Blurry cell phone pics of my drive to school: 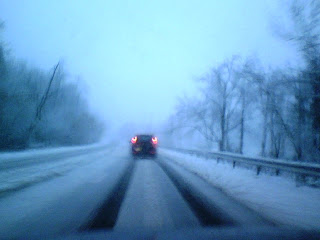 The school parking lot--note the snowplow piles--where I ran into another teacher and discovered school had just been canceled, which explained the odd lack of buses in the other lot: 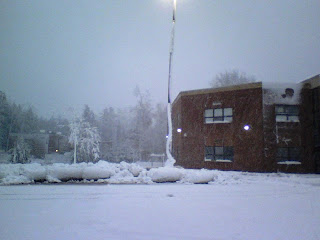 And a church that I passed on my way home: 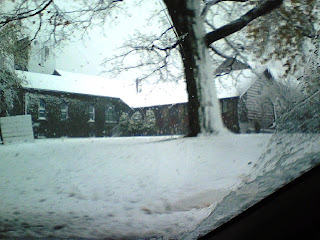 And because we're crazy about photos here at implosion explosion today, here's my sister's Christmas mitten taking a bath. I love how you can see the reflection of the lace curtains in the surface of the water. 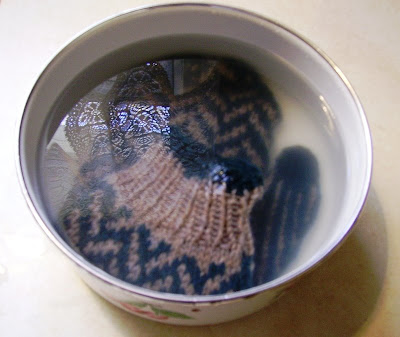 And because we're also crazy about other people's photos, check out the Library of Congress's 1930s-1940s in color photo set. I do wish, however, that random jackholes were not enabled to put notes on them, like this one for example, or this one. Why aren't assy comments enough? Why mar the actual photo with an assy note?
Posted by Cari at 9:57 AM 3 comments:

Labels: mittens, oh yeah, snow before halloween, this is awesome

1. Rehire meeting at the mountain yesterday. I got to see all my snowboard-instructor buddies and plot this winter's adventures (upside) and remember what a gossip factory the place is (downside). I may be going to a women's clinic in Vermont in December and taking my AASI Level 1 in New York in January. Yay! And better yet--I'm supposed to be getting a Burton pro form, with which I can order massively discounted stuff! I love my old board and its spray-paint customization (see my avatar), but it's a little stiff and I want a new, shorter, poppier one. I'll save the old one for teaching (kids are always running over your board, grr) and rocky spring days.

2. Restarted the Herringbone mittens with some Paton's classic merino and finished the first one, with kind of a weird thumb that I refuse to fix. These will be going to my older sister for Christmas and will be the only gift I knit. (Famous last words.)

3. I am teaching all this week--from my own lesson plans, I mean; my mentor teacher has been letting (making?) me teach since the first week of school. So I'm not too nervous, but now my professors will be coming to observe me. So that's going to be a bit tough, but then, I passed my six-month observation while teaching in Japan with flying colors even though I was nervous as hell, so hopefully this won't go too badly.

4. And speaking of Japan, today is the anniversary of the day my company filed for bankruptcy protection. I'm not marking the day with anything special, just noting. It's satisfying to think about how far I've come. Then: miserable, directionless, angry, broke. Now: happier, directed, ...still broke. But the semester will end and the season will start, and I'll be riding (hopefully on a new board!) every day again.

I just ripped out the Herringbone mittens I had started because a) I screwed up and misread the thumb chart and b) I decided there was too much contrast between the white and dark blue yarns. Even though I like all the finished products in black and white and other high-contrast schemes on Ravelry. For some reason mine just looked bad. Possibly partly because my gauge was a little loose and it all looked sloppy. I don't know.

I forced myself to take a knitting hiatus after finishing my Endpaper mitts to try to force myself to get some schoolwork done, on the theory that I can't type if I'm knitting. You know what I ending up doing? Nothing. I know it's a cliche to say that knitting is meditative, but I got nothing done for a whole weekend. I managed to bang out a really crappy conclusion to a paper and that's it. Then I started some mittens and all of a sudden, I was back on track. Thought up a really great activity for a lesson plan, thought of a couple of sources to use for a resource anthology, etc. It's so funny to have it brought home so literally--all the jokes we knitters make about knitting to stay sane, etc. Although isn't that the definition of dependence? That you can't get by without it? 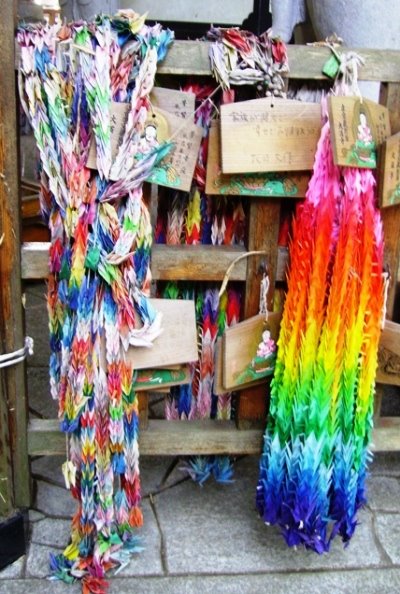 Cari
My long-range goals include keeping my apartment from sinking into outright squalor, downloading as much free music as possible, and making a buddy movie with my sister. She'll play the part of the robot dinosaur and I'll be the rainbow-colored pony with a song in my heart. Oh the adventures we'll have! Coming Memorial Day weekend 2007. [The movie is stalled in production while the great woolly hamster's agent haggles for a greater share of the royalties; meanwhile, the executive producer got bored and withdrew support. We are currently seeking backers for our next project, to be entitled "She Wears Pants!"]

This is a Flickr badge showing public photos from safety dance. Make your own badge here.